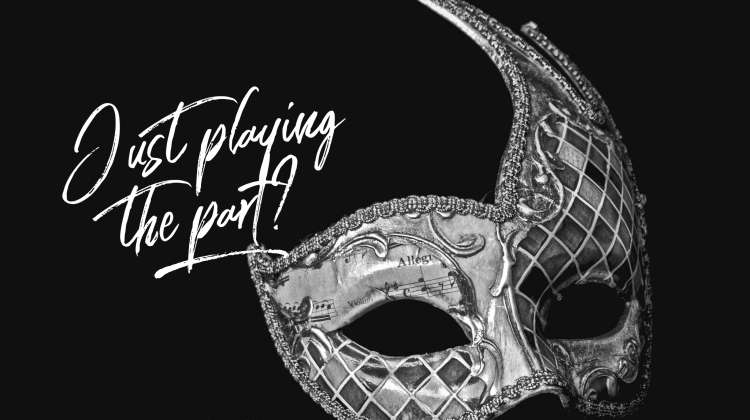 When we watch a movie or TV program, we see people playing a role. If they are good at their craft we tend to forget that they are acting.  I enjoyed the long-running series, West Wing.  Martin Sheen is forever identified in my mind as President Jed Bartlett. He slipped into that role and made it his. But, in fact, he was creating an illusion, to draw us into a story. It is play-acting and so when the show is over we all go back to the real world.

Is your practice of Christianity worthy of an Oscar, a great performance, but only that?Are you trying hard to act like a Christian, but failing to actually be one?

We are invited to be ‘born again,’ to enter the Kingdom of God by the regeneration of the Holy Spirit. When we come to God, in faith, receiving His grace, the Word says that the ‘old is gone, the new is come.’   Some of us, allow ourselves to slip into playing a role. Jesus warns about that.  “Be careful not to do your ‘acts of righteousness’ before men, to be seen by them. If you do, you will have no reward from your Father in heaven.” (Matthew 6:1, NIV)

If we are focused on gaining people’s approval, we may do good things, even have a positive effect in the wider world, but there will be no heavenly reward. Jesus illustrates the importance of authenticity speaking to our prayers. They are not to be addressed to those who hear us praying. When we pray, we are talking to God, the Father.  He says if we make a great speech in the name of prayer, when we’re done and people admire our fine words, we have the reward we wanted. Likewise, He says when we give our offerings that we should not announce our generosity, letting God’s blessings be our true reward!

The best prayers are prayed without regard to the notice or approval of others. Indeed, Jesus tells us that praying is done best ‘in secret.’ That way we are not tempted to become actors. That is not to say there isn’t a place to pray together, to share in times of prayer. There certainly is and we can know real power in the prayer of those who gather in His Name! But, our soul work, the wrestling with our sins, our deepest worship, will be done when we are alone with God.  When there is no one to impress, we are ‘honest to God’  and our prayers have integrity. To be sure, those who refuse puffed prayers may not gain the same kind of approval that those who wear masks enjoy for a time.

It’s relatively easy to play the role of a devoted follower of Christ for a couple of hours on Sunday morning compared to walking in faith each day of the week. Real Christians don’t hide their failures or play up their successes. They don’t need makeup artists or image consultants. The only One they seek to please knows them inside out!

Remember the promise, dear Christian. God sees all and, in eternity, there will be an awards ceremony unequaled here in this world. God’s awards won’t be for the best actors. In fact, Jesus said that the least will be first, those whose service, offerings, prayers were offered in hidden places will find God’s richest reward.  Paul, near the end of his life, regarded by many as a failure, counted on the Lord’s commendation. He wrote “God’s applause! Depend on it, he’s an honest judge. He’ll do right not only by me, but by everyone eager for his coming.” (2 Timothy 4:8, The Message) What a glorious Day around the Throne of God. What could compare to receiving the commendation of Christ?  Now, that’s an award worth living for!

Here is the word from the Word. This passage should bring great sobriety to those who are just trying to act like a Christian. They are of great comfort for those whose inner life and outer works are aligned, in integrity. I hope it’s a powerful promise for you that keeps you real.  “Nothing in all creation is hidden from God. Everything is naked and exposed before his eyes, and he is the one to whom we are accountable.” (Hebrews 4:12-13, NLT)