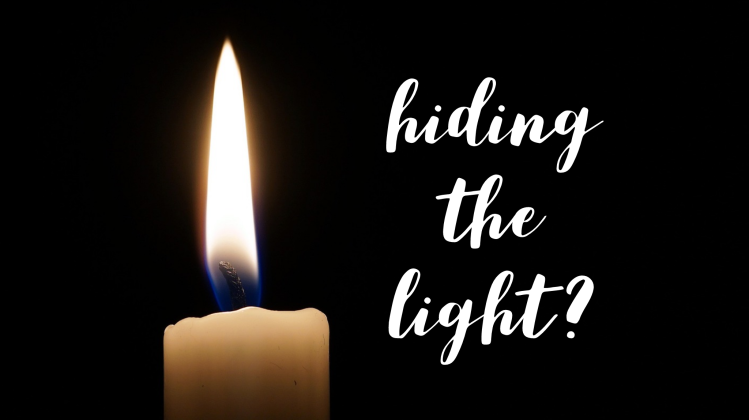 Who among us, regardless of our political persuasion, has not learned to keep our opinions under wraps these days? It’s a time of strong feelings about so many choices made by our government, a time when one can lose a friend by offering support to or criticism of party or President. We are much poorer as a nation for our inability to have a real conversation, speaking as we do, in sound bites, clichés, and Facebook posts. Fear has destroyed the engaged discourse that helps us better understand the complex issues of the day for which neither side has complete answers.

Have you become a ‘secret disciple’ of Jesus, too?  It’s tempting, isn’t it? Christians are often targets for criticism, some of it well-deserved I believe. Using snippets of Scripture completely out of context to support political opinion leaves us looking silly or ignorant. Being unable or unwilling to talk about our convictions, to examine which ones are just our traditional understanding and which are foundationally rooted in the complete revelation of the Holy Word, gives us closed minds. Thus, being a conservative (not politically, but Biblically) Christian in our time often invites ridicule.  Then, too, there is the fact that the true disciple of Jesus will offend ‘the world’ just like our Lord did!  So, some choose to become a secret disciple.

John tells us about a good man who felt the heavy weight of fear, who had much to lose in ancient Jerusalem because he had become convinced that Jesus was Who He claimed to be. He says, “Joseph was a disciple of Jesus, but secretly because he feared the Jews.” (John 19:38, NIV)

Secret discipleship misses the mission Jesus gave to us.  Our words, our actions, are intended to shed light on a very dark world.  “You are the light of the world—like a city on a hilltop that cannot be hidden. No one lights a lamp and then puts it under a basket. Instead, a lamp is placed on a stand, where it gives light to everyone in the house. In the same way, let your good deeds shine out for all to see, so that everyone will praise your heavenly Father.” (Matthew 5:14-16, NLT)  Perhaps if we were less concerned about for whom we were baking a cake, if we were more intentional about caring for those in need with real love, if we stopped making certain political positions the test of a ‘true’ Christian – His light shining out of us would actually cause people to thank God for us.

Real disciples of Jesus have changed the world. In the Roman empire, a brutal place full of death, Christians stood out for their love for all particularly the downtrodden.  The church was unique in the first century as a place where slave and free worshiped side by side, where women were treated as equals, where hope was available to everyone.  Those people claimed unwanted children and raised them in spite of their own poverty. They refused violence, actually ‘turning the other cheek’ like Jesus taught. Centuries later, in the time of the plagues in Europe, Christians cared for the sick when others fled, abandoning family. Their loving concern won them great admiration. Why did they do these costly things?  Because their true course was guided by eternal hope! They did not fear ‘having less’ because they took on another orphan. They did not fear death because they knew they were going Home to the Father’s house.

Is the Light of Jesus hidden in your life?  Perhaps it is obscured by a selfishness that has wrapped itself around your salvation making Jesus into a way to gain more for yourself. Listen to your prayers to see if this is true of you. Are your prayers primarily about your own circle of concern; more money, better health, blessings for your children?  This preoccupation with Self will dim the light in us and make us an unintended ‘secret disciple.’  Or, like Nicodemus, perhaps you have chosen to keep your love for Jesus under cover because you fear the rejection of friend or family.

Let the Light Shine!  The word from the Word today is challenging, not easy to digest, but compelling. “Then he said to the crowd, “If any of you wants to be my follower, you must turn from your selfish ways, take up your cross daily, and follow me. If you try to hang on to your life, you will lose it. But if you give up your life for my sake, you will save it. And what do you benefit if you gain the whole world but are yourself lost or destroyed? If anyone is ashamed of me and my message, the Son of Man will be ashamed of that person when he returns in his glory and in the glory of the Father and the holy angels.” (Luke 9:23-26, NLT)

Abba, secure us in Your love.
Set hope in us so that fear is gone.
Teach us to radically love,
to know how to speak, to think,
to act in ways that lets the Light of Your Son shine
brightly through us.

Wonder Down Under Music  (Admin. by Music Services, Inc.)