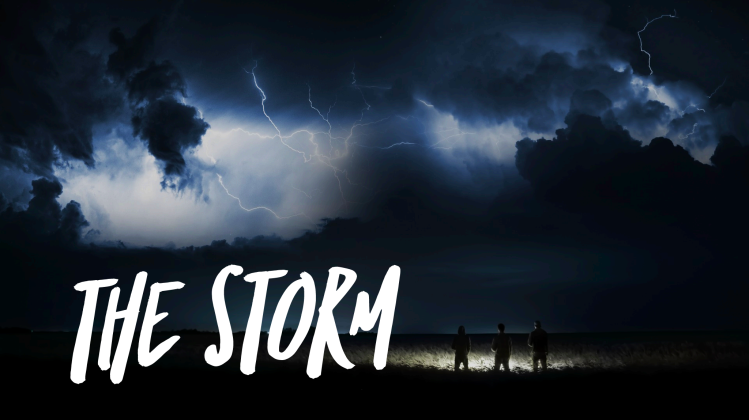 Call me silly, but I love Summer’s thunderstorms. Standing in sunshine, I can see the dark on the horizon and I know that in moments the storm will be blowing around my house.  As the storm approaches, the trees begin bend in the wind that howls. Debris whips around. An ominous darkened sky settles like a heavy blanket over the earth.  Bright flashes of lightning slash through the sky, followed by the crash of thunder that shakes the ground. What a display! And, then, just as quickly as it arrived, it’s gone. The birds sing again; the sun shines.

John 18 tells several interwoven stories, but it Peter’s story that captured my attention this morning. Jesus told his friends the storm was coming, that He must die. He warned Peter that he, the Rock, would fail! Then, after His soul-wrenching cries in the garden, the soldiers arrived and He was dragged to begin the awful procession to the Cross. Peter observed it all.

At  one point, he lashed out with his sword, cutting off the ear of a man. Jesus told him to put the sword away, that He ‘must drink the cup the Father has given me.’  Not long after that strange conversation, Peter is standing in the courtyard of the High Priest’s home, the storm is raging around him and in him. And John tells us this – “Peter had to stay outside the gate. Then the disciple who knew the high priest spoke to the woman watching at the gate, and she let Peter in. The woman asked Peter, “You’re not one of that man’s disciples, are you?” “No,” he said, “I am not.” (John 18:16-17, NLT)  Crash! Failure:  and it got worse, much worse.

A few chapters and many days later, the Resurrected Lord found Peter and spoke tender words of healing and forgiveness. Peter never looked back, investing the rest of life to tell the Story, through some up’s and down’s but he never uttered those words of denial again. He died a martyr about 3 decades later, after seeing thousands come to faith in Christ Jesus.

Christian, there will be chapters in your life much like John 18!  If life had a musical score, the ominous low sounds would start to play as the drama increases. The storm will start, a darkened sky at first, then tempestuous. You will be tempted to run, perhaps to deny Him, to wonder why it is this way, if He is there.  What will you do?

I encourage you to STAND FIRM. Wait out the storm.  No less than a dozen times, Paul writes those words in his letter – “Stand firm.”  “Be on guard. Stand firm in the faith. Be courageous. Be strong.” (1 Corinthians 16:13, NLT)  You are stronger than you think you are. Why can I say that? Because you are not alone, in spite of what you may feel.  God is your Advocate, so stand firm.

And, learn to do something that few of us do well in our time – WAIT. “And the Lord direct your hearts into the love of God, and into the patient waiting for Christ.” (2 Thessalonians 3:5, KJV)  When the storm is reaching its crescendo, we just want it to be over. We may be tempted, like Peter when he used the sword, to try to settle the score, make it all end quickly, find some quick fix. But, God asks us to wait patiently for His purposes, even when they are beyond our comprehension in the moment. So, wait!

And, remind yourself that FAILURE IS NOT FATAL.  Near the end of the dramatic 18th chapter of John, Peter hears the rooster crow in the pre-dawn hour but that sound announces his failure loudly! Jesus had warned him that he would deny Him three times before the next day dawned- and he had.  He failed, badly. He abandoned the One who was dearest to him and the storm only worsened.  It felt like the ‘end of the story.’  We learn that Peter went back to Galilee and to his fishing boat. It was safe and familiar. I have to think that for those few days that he was there, each time he threw a net into the water, he heard himself say, “I never knew Him.” We might write off a friend like that but Jesus did not.  And, one morning, He found that broken man and told him, “Feed my sheep!”

Stormy time in your life?
Stand. Wait.
Failed? Turn back and, with repentance, find renewal.

Our word from the Word come from Peter, writing years later to Christians and to us. Speaking from inspiration and experience, he says – “Stay alert! Watch out for your great enemy, the devil. He prowls around like a roaring lion, looking for someone to devour. Stand firm against him, and be strong in your faith. Remember that your Christian brothers and sisters all over the world are going through the same kind of suffering you are. In his kindness God called you to share in his eternal glory by means of Christ Jesus. So after you have suffered a little while, he will restore, support, and strengthen you, and he will place you on a firm foundation. All power to him forever! Amen.” (1 Peter 5:8-11, NLT)