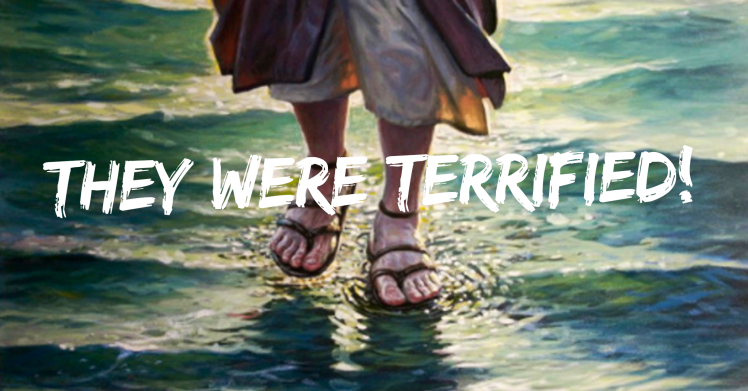 Do you like surprises?  Before you answer that, consider that the unexpected comes in many different packages!  It delights me to open the mailbox and find a note or little gift from someone. Great surprise, right?  I am not so pleased when a crisis explodes into my life, demanding every bit of courage I can muster to meet it. What can those surprises look like?  It could be sickness, or a change in employment, or a misunderstanding that creates tension.  But, how about when Jesus shows up to meet you?  Have you ever encountered His Presence powerfully in a way that surprises you in a way that is not so pleasant?  His disciples did.

The story is one that has captured our imagination, one of the more familiar ones about Jesus. In fact, the phrase “walking on water” has entered our vocabulary as a reference to someone who does something that we consider impossible. Here is how John experienced that surprising moment.  “When evening came, his disciples went down to the lake, where they got into a boat and set off across the lake for Capernaum. By now it was dark, and Jesus had not yet joined them. A strong wind was blowing and the waters grew rough. When they had rowed three or three and a half miles, they saw Jesus approaching the boat, walking on the water; and they were terrified. But he said to them, “It is I; don’t be afraid.” Then they were willing to take him into the boat, and immediately the boat reached the shore where they were heading.” (John 6:16-21, NIV)

A couple of issues set up the story.

First, Jesus missed the boat!  It was time to go home, a trip across the lake. They waited around ‘til dark and Jesus did not show up so they finally decided to just go home.  I have to wonder if they were a little put off about that. Did they wonder where He was? Were they irritated that they had to make the trip in the dark?  Then, they find themselves rowing into a strong wind on choppy water.  Again, my imagination has them complaining about the delay in departure while they are rowing feeling a growing concern about the weather.

Then, the BIG surprise – Jesus showed up in the middle of the lake, without a boat!

It’s a wonderful story to us but to those men it was a moment of terror, not a welcomed surprise, at all. They loved Him. But, nobody expected Him to show up in the middle of the windy trip on a rough water.  What they saw had no explanation or understanding, and they were frightened half to death. John implies that they initially resisted His approach. It’s not a long stretch to imagine that their terror caused them to scream at this ‘sight’ to go away. Until, He spoke and His voice, familiar to them, assured them that this was no ghost. This was their Friend, joining them, so they then welcomed Him into their boat.

Our “Sunday School” ideas about Jesus often tame Him, make Him into a nice, comforting Presence fitting neatly into our lives without disturbance. That is not the Jesus of the Gospels. He does not ‘fit into’ my life, or yours, neatly. Often, when He shows up, it is surprising, terrifying, disturbing, disorienting.  He is the Lord of Life and it is His right as our King and God to appear in our lives as He wishes.  When He does, in the middle of our fear over the unexpected, let us listen for His voice.

Those disciples were terrified another time when He arrived unexpectedly.  After His crucifixion, while they were still grappling with the Resurrection, Luke tells us about His appearance. ” While they were still talking about this, Jesus himself stood among them and said to them, “Peace be with you.” They were startled and frightened, thinking they saw a ghost. He said to them, “Why are you troubled, and why do doubts rise in your minds? Look at my hands and my feet. It is I myself! Touch me and see; a ghost does not have flesh and bones, as you see I have.” (Luke 24:36-39, NIV)

Today, I encourage you, wherever you are in your life, whatever your situation, to invite Jesus to be present. Instead of being shocked at His appearance, or even more sadly, missing out on Him altogether, invite Him to come close. Open your heart and your mind to His Presence, listening for the voice of the Spirit.  Don’t be afraid. Be full of faith.

Here is a word from the Word.  Live in the promise of His Powerful Presence today, not fearing, but full of faith. “God has not given us a spirit of fear and timidity, but of power, love, and self-discipline. . . .For God saved us and called us to live a holy life. He did this, not because we deserved it, but because that was his plan from before the beginning of time—to show us his grace through Christ Jesus. And now he has made all of this plain to us by the appearing of Christ Jesus, our Savior. He broke the power of death and illuminated the way to life and immortality through the Good News.” (2 Timothy 1:9-10, NLT)