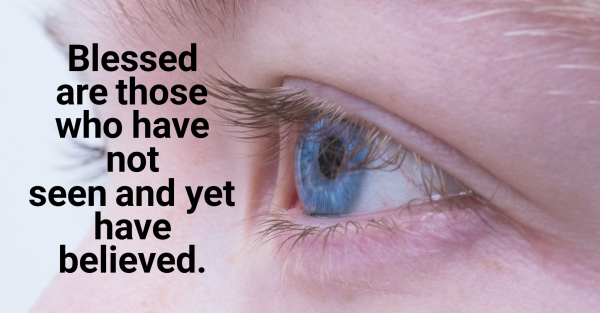 On Sunday morning, after our congregational prayer, the people join me in saying “I believe in God, the Father Almighty, the Maker of heaven and earth,  and in Jesus Christ,  His only Son, our Lord…”  The declaration always fills me up with a special kind of joy, hearing all those voices united in the Apostle’s Creed.  This ancient creed affirms the core elements of Christian doctrine that unite the Body of Christ and I see it as both a teaching moment and a statement that reaffirms the foundation of our hope!

“I believe!” What does that mean?
Is it agreeing in my mind with the words?
Is it being convinced of the truth?
Is it struggling with conflicted thoughts and making a choice?
Is it a ‘knowing’ that goes beyond proof?

Jesus appeared to His disciples after Resurrection knowing that Thomas was refusing to believe the testimony of his friends. Somewhat defiantly he had said he would only believe if he saw Jesus with his own eyes and was convinced by the marks in His hands and side. “Then he said to Thomas, “Put your finger here; see my hands. Reach out your hand and put it into my side. Stop doubting and believe.” Thomas said to him, “My Lord and my God!” Then Jesus told him, “Because you have seen me, you have believed; blessed are those who have not seen and yet have believed.” Jesus did many other miraculous signs in the presence of his disciples, which are not recorded in this book. But these are written that you may believe that Jesus is the Christ, the Son of God, and that by believing you may have life in his name.” (John 20:27-31, NIV)

Belief is connected to faith. It is not a blind leap into the dark, but it does require trust in the unseen.  That Jesus lived, a real man in Palestine 2 millennia ago, is beyond debate. There is ample proof that an itinerant rabbi taught radical ideas about knowing God. But, to accept that He is God in flesh, that He died according to the will of God for our sins, and was raised to life to assure us of our eternal salvation – demands faith.  The Gospels tell us the stories and we have a choice to make. Will we believe them to be the truth or will we turn them into fables?

Faith is both a gift of the Spirit of God at work in us and a decision we make in our response.  To say “I believe,” does not eliminate all doubts, answer every question, or turn our world into stark black and white!  We believe and we ‘work out our salvation,’ one day, one question, at a time.  My own experience as a Christian is something of a paradox.  The longer I live the Christian life, the deeper my faith goes, a solid bedrock foundation for my life. At the same time, there are moments when trusting God is more difficult than ever. I am convinced that Christ is God’s revelation of Himself, that He is the Savior.  But there complex questions that I wrestle with that most likely will not find resolution on this side of Heaven. That does not mean that I am without faith, nor does it indicate a flawed Christianity.

Paul alludes to the mysteries of faith saying, “Now we see but a poor reflection as in a mirror; then we shall see face to face. Now I know in part; then I shall know fully, even as I am fully known.” (1 Corinthians 13:12, NIV)  The mirrors of his time were not like ours. They were polished metal with a imperfect surface so that the image was imperfect, a distortion of the face shown on it.  Our faith, he says, deals with distortions caused by our imperfect knowledge, our bias, faulty teaching, wrong assumptions – all part of humanity. But, there will be a moment of absolute clarity when we see Jesus face to face! Oh, Glorious Day!

So, while we live among the questions, we rest on the unfailing grace of the revelation of Jesus Christ.  Our faith is at work, empowered by the Spirit who also works powerfully in us and around us. Here is a word from the Word. Believe, love, live! “Blessed is the man who perseveres under trial, because when he has stood the test, he will receive the crown of life that God has promised to those who love him. … Do not merely listen to the word, and so deceive yourselves. Do what it says.  … But someone will say, “You have faith; I have deeds.” Show me your faith without deeds, and I will show you my faith by what I do.” (James 1:12, 22; 2:18, NIV)

I believe in God, the Father Almighty,
the Maker of heaven and earth,
and in Jesus Christ,
His only Son, our Lord:
Who was conceived by the Holy Spirit,
born of the virgin Mary,
suffered under Pontius Pilate,
was crucified, dead, and buried;

He descended into hell.
The third day He arose again from the dead;
He ascended into heaven,
and sits at the right hand of
God the Father Almighty;
from there He shall come to judge
the living and the dead.

I believe in the Holy Spirit;
In Christ’s universal Church;
the communion of all Believers;
the forgiveness of sins;
the resurrection of the body;
and the life everlasting.