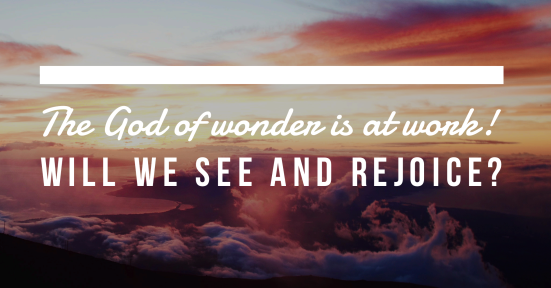 I’m not gullible and I do not go around looking for ‘signs.’ My faith in God does not require them. But, nothing in this life compares to those miracle moments when His Presence is near. When I see His love healing a broken life, I see a miracle. When a person responds to the Gospel of Christ and surrenders her life to Him, I see a miracle. When a little child races up to me with an excited greeting and a warm hug, it is a wonderful kind of miracle.

Oh yes, I have experienced ‘real’ miracles, too.  On a March morning in 1985, I saw our foster son who had drowned in Dad’s farm pond restored to life, after doctors declared that he would not recover. In those 20 months that Bev and I walked the cancer journey, we experienced the miracle of love. Though we did not receive the miracle of her healing, we were blessed to love each other up to that moment she died in my arms. It is something of a miracle of God’s grace that I have found my way through grief and loneliness without making a wreck of life.

Do you see the miracles that are happening all around you or are you quick to dismiss things as ‘emotional’ or just coincidental?

John tells a story about some men who were so gripped by their ideas about what God wanted and who He was that they missed a miracle that was right in front of their eyes. “Inside the city, near the Sheep Gate, was the pool of Bethesda, with five covered porches. Crowds of sick people—blind, lame, or paralyzed— lay on the porches. One of the men lying there had been sick for thirty-eight years.  When Jesus saw him and knew how long he had been ill, he asked him, “Would you like to get well?” “I can’t, sir,” the sick man said, “for I have no one to help me into the pool when the water is stirred up. While I am trying to get there, someone else always gets in ahead of me.” Jesus told him, “Stand up, pick up your sleeping mat, and walk!” Instantly, the man was healed! He rolled up the mat and began walking!”

What an amazing development, a cause for celebration and rejoicing, right?   After 38 years a man is walking, whole, on his feet!

If we witnessed a miracle like that, would you not think that everybody who knew him would be infected with his joy, overcome with his excitement?  Some men were not! John goes on to tell us this important detail:  “This miracle happened on the Sabbath day.” So, what, right?  To some religious leaders that was an important fact, even more important than a man being healed. “The Jewish leaders objected. They said to the man who was cured, “You can’t work on the Sabbath! It’s illegal to carry that sleeping mat!” He replied, “The man who healed me said to me, ‘Pick up your sleeping mat and walk.’  ”Who said such a thing as that?” they demanded. The man didn’t know, for Jesus had disappeared into the crowd. But afterward Jesus found him in the Temple and told him, “Now you are well; so stop sinning, or something even worse may happen to you.” (John 5:2-14, NLT)

These religious leaders, people who ought to have known God’s’ work when they saw it, were blinded by their traditions. A man who was walked around after being crippled for his entire life was violating their religious traditions! And so they rushed past the miracle to register an objection.  It had happened before to Jesus. Matthew tells about a healing of a man with a deformed hand. There, too, the Pharisees only saw that He did it on the Sabbath, in violation of their prohibition against doing ‘work,‘ so instead of rejoicing that a man was healed, they “discussed plan to kill Jesus.”

Before we shake our heads at these men, condemning their refusal to see the miracles, let us remember that we, too, can become captives of our own ideas about what God can do, where He should do it, and with who He can work. I have missed my share of God’s wonders while being so focused on my plans, my ideas, my needs that I was unable to respond to His leading and unwilling to feel the wonder or share the joy.

Today, the God of wonder is at work!  And He will be working in your neighborhood, and mine, too. The question is, will we perceive His work? Will we rejoice with those in whom He is working?

Here’s a word from the Word, Jesus’ words of frustration with those who would not see what He was doing.  Let these words challenge you to celebrate the wonder, to open your eyes to the miracles of the hand of God who is here, now!

“To what can I compare this generation?  They are like children sitting in the marketplaces and calling out to others: ”‘We played the flute for you, and you did not dance; we sang a dirge, and you did not mourn.’ For John came neither eating nor drinking, and they say, ‘He has a demon.’ The Son of Man came eating and drinking, and they say, ‘Here is a glutton and a drunkard, a friend of tax collectors and “sinners.”’ But wisdom is proved right by her actions.”

Abba, give us eyes that can see what You are doing.
Protect us from feeling that we ‘know’ all there is to know about You.
Make us childlike in our faith while keeping us from childishness!
Teach us to rejoice in You, to seek You, to love You.
For Jesus’ sake and His Name, I pray. Amen