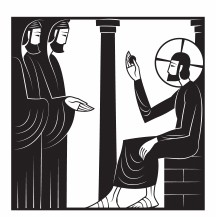 American humorist and author, Mark Twain, reportedly said,  “It ain’t those parts of the Bible that I can’t understand that bother me, it is the parts that I do understand.”   No fan of religion or Christianity, Twain despised the Church and understood the God of the Bible as “a thug.”  Lost in the questions, it appears he never found the Answer.

On Tuesday of the week before the Cross, the Gospels tell us that Jesus was back at the Temple to engage the religious authorities. Mark, whose likely source was Peter, tells us that He engaged in a running debate that day with those authorities who kept asking Him questions – not for the purpose of finding real answers but to try to get Him to say something they could use to make a formal charge. “By what authority did you come in here and say those things you say? Should we pay tax to Caesar or not?  If a woman is married (because of successive deaths) to seven brothers which one will she be married to in Heaven? Which commandment is greatest?”  Jesus took the questions and answered them wisely and without giving them the base for accusation they desired. In fact, we learn this about Him: “They were amazed at Him.”  (Mark 12:17)

Anyone who has parented a teenager knows the tactic of parsing words and avoiding directions.  With keen interest in the exact meaning of words, a 14 year old can turn into skilled debater. “But, you really said … I did not think you actually meant …”  though both parent and child know exactly what was intended by the request or in the direction.

In the pointed exchange that day in the Temple, Jesus told a teaching story that remains a powerful lesson for us.  “But what do you think about this? A man with two sons told the older boy, ‘Son, go out and work in the vineyard today.’ The son answered, ‘No, I won’t go,’ but later he changed his mind and went anyway. Then the father told the other son, ‘You go,’ and he said, ‘Yes, sir, I will.’ But he didn’t go. “Which of the two obeyed his father?” They replied, “The first.” Then Jesus explained his meaning: “I tell you the truth, corrupt tax collectors and prostitutes will get into the Kingdom of God before you do. For John the Baptist came and showed you the right way to live, but you didn’t believe him, while tax collectors and prostitutes did. And even when you saw this happening, you refused to believe him and repent of your sins.” (Matthew 21:28-32, NLT)

Christian friend, don’t get so caught up in the words that you forget to follow!  Are there questions about our faith, about God and His ways, about the way of life to which we are called? Yes!  And take this from a disciple who has been following Jesus for a half century, those questions do not get easier with time. That is why it is called ‘faith.’  We must match reason with revelation, obey the things we know even as we wrestle with the things we do not yet understand. Our hearts find peace in that obedience as we live in fellowship with the Spirit. James is simple and clear – “Anyone, then, who knows the good he ought to do and doesn’t do it, sins.” (James 4:17, NIV)

Where are you positioned as a disciple, at the fringe of the crowd or close to the Savior? Are you trying to find that place of minimal obedience, of reluctant submission? Let me encourage you to wholeheartedly pursue the Lord.  Your questions may be valid, but like those of a child with limited understanding, there may not be answers for them right now. What do you know? What has He said?  Live in that place.

Here is a word from the Word for this Tuesday of Holy Week. As you read these words, let your imagination place you in the crowd standing ‘round Jesus in the Temple, but not with the skeptics. Instead, find yourself in worshipful adoration.  “One of the religion scholars came up. Hearing the lively exchanges of question and answer and seeing how sharp Jesus was in his answers, he put in his question: “Which is most important of all the commandments?” Jesus said, “The first in importance is, ‘Listen, Israel: The Lord your God is one; so love the Lord God with all your passion and prayer and intelligence and energy.’ And here is the second: ‘Love others as well as you love yourself.’ There is no other commandment that ranks with these.” The religion scholar said, “A wonderful answer, Teacher! So lucid and accurate—that God is one and there is no other. And loving him with all passion and intelligence and energy, and loving others as well as you love yourself. Why, that’s better than all offerings and sacrifices put together!” When Jesus realized how insightful he was, he said, “You’re almost there, right on the border of God’s kingdom.” After that, no one else dared ask a question.” (Mark 12:28-34, The Message)

May He find us faithful and in a place where we find peace in His purposes.