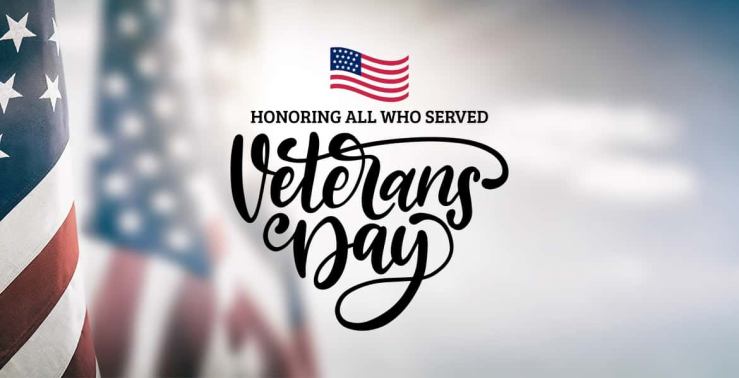 Today is Veteran’s Day, formerly called Armistice Day. It was set to mark the end of the ‘war to end all wars,’ that awful conflict in the early 20th century that saw armies in trenches, an exercise in madness that cost millions of lives that officially concluded on the 11th day of the 11th month at the 11th hour. Tragically, just 2 decades after World War 1,  the drums of World War 2 were beating. Millions more died in that struggle to defeat tyranny and hatred. America is still fighting her longest war, with soldiers in Afghanistan for 18 years!  Some of the youngest soldiers going to that war were infants when it began.

Despite our dislike of war, it is important that we take the time to honor those who have served in our nation’s armed forces today. While we abhor the violence of war, we recognize that it is sometimes necessary to take up arms in defense of the nation’s interests. Those men and women who answer that call to serve are owed a debt of gratitude!

Soldiers, sailors, air men, and marines – we THANK YOU for making our way of life possible, for protecting our lives and liberty.

Christian, we tend not use militaristic language in church as much today as in the past, but let me remind you that, in Christ, we are all called to serve to extend the borders of the Kingdom of Christ Jesus. No, it’s not a political realm, nor are the weapons of our engagement bullets or bombs. We are called to push back evil, overcoming it with good; to defeat death by sharing the gift of life through Jesus Christ. We go to feed the hungry, comfort the broken, lift up the fallen, set at liberty the oppressed – through the Gospel of Christ Jesus.

His Mission is Our Mission. Jesus said “The Spirit of the Lord is on me, because he has anointed me to preach good news to the poor. He has sent me to proclaim freedom for the prisoners and recovery of sight for the blind, to release the oppressed, to proclaim the year of the Lord’s favor.”(Luke 4:18-19, NIV)

Paul frequently referred to the calling of the disciple with terms borrowed from the military world.  He urged Timothy to overcome sin and temptation. “But you, man of God, flee from all this, and pursue righteousness, godliness, faith, love, endurance and gentleness. Fight the good fight of the faith. Take hold of the eternal life to which you were called when you made your good confession in the presence of many witnesses.” (1 Timothy 6:11-12, NIV) In his second letter, he is even more explicit – “Endure hardship with us like a good soldier of Christ Jesus. No one serving as a soldier gets involved in civilian affairs—he wants to please his commanding officer.” (2 Timothy 2:3-4, NIV)

In the well-known imagery of spiritual warfare, he says, “Stand your ground, putting on the sturdy belt of truth and the body armor of God’s righteousness. For shoes, put on the peace that comes from the Good News, so that you will be fully prepared. In every battle you will need faith as your shield to stop the fiery arrows aimed at you by Satan. Put on salvation as your helmet, and take the sword of the Spirit, which is the word of God. Pray at all times and on every occasion in the power of the Holy Spirit. Stay alert and be persistent in your prayers for all Christians everywhere.” (Ephesians 6:14-18, NLT)

Christian, we can be strong in the Lord without becoming militant! We must understand that this life in Christ is not a pleasure cruise to Glory, a perpetual ‘walk in the park.’ There is a real Enemy who desires the destruction of our faith, who holds those without Christ in captivity, who causes untold suffering for humanity.  He is not defeated by songs and sermons alone!  He must be met in the streets by disciples who are fearless, full of faith, and prepared to die to Self.  The veterans of this conflict will bear the scars and wounds of war, too.

Today, even as you remember those who have served in our Marines, Army, Navy, and Air Force and offer your appreciation to those vets that you encounter –  may God, the Spirit, renew the call to serve in your life. May He give us a vision of a robustly strong faith that engages evil, that prays for the defeat of the Devil, and that loves those who are apart from God with a courageous love.

Here is a word from the Word.  Lord, raise up bold warriors of love and may we lead captives to glorious freedom in Jesus. Amen  We will serve “in truthful speech and in the power of God; with weapons of righteousness in the right hand and in the left;” (2 Corinthians 6:7, NIV)  “The weapons we fight with are not the weapons of the world. On the contrary, they have divine power to demolish strongholds. We demolish arguments and every pretension that sets itself up against the knowledge of God, and we take captive every thought to make it obedient to Christ.” (2 Corinthians 10:4-5, NIV)

When The Battle’s Over

I am a follower of Jesus Christ. I am a Dad to Jay, Sean, Christine, and Maribel. I am a Pastor at Faith Discovery Church. Jerry D. Scott View all posts by Jerry Scott